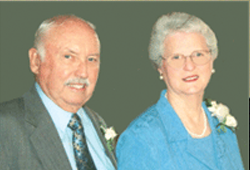 For years he preached stewardship from the pulpit of United Methodist churches-from Pachuta, Mississippi to Bossier City, Louisiana, and many points in between.

Upon receiving an inheritance from his father, the late Reverend Tom O. Crosby, Jr. said, "I preached stewardship all my life, talking the talk. So when I was given this from my father, I had to walk the walk."

Tom and his wife Wilma, moved to Baton Rouge in 1991 when Tom retired. They were able to choose a church for the first time in their married lives. They joined Broadmoor United Methodist Church and Wilma is still active in their Sunday School class.

Tom's calling to ministry came slowly but surely. He joined a prayer and Bible study group when serving in World War II. His spirituality grew when he was faced with his own mortality, which he jokingly calls "foxhole religion." He graduated in 1949 from Asbury Theological Seminary in Wilmore, Kentucky and began his career as a pastor in the Louisiana Annual Conference of the United Methodist Church.

The Crosbys inherited stocks from Tom's father. They contacted Reverend Jimmie Caraway, former president of the United Methodist Foundation and Treasurer of the Louisiana Annual Conference for financial advice. Jimmie referred Tom and Wilma to the Foundation, where they were advised to set up a charitable remainder unitrust or CRUT.

Working with the Foundation was very easy. They received an income tax deduction in the year they established their CRUT and began receiving regular distributions of income. Now that Tom has passed, after Wilma's lifetime, income will be divided among their three children for ten years. The CRUT will eventually benefit two organizations very close to the Crosbys' hearts: Broadmoor United Methodist Church and Asbury Theological Seminary.

Tom once said, "I have always loved the mission of the church and want to keep it going. As for Asbury, I see the financial need of students when I attend our reunions and I want to help the students going into ministry."

"Walkin' the walk" has provided income to the Crosbys for their lifetimes, will provide for their children later and ultimately will leave a legacy for others.