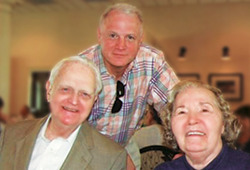 Many people know William L. "Dub" Henning, Jr. as a Lake Charles business leader, but his Methodist roots run deep. His great-grandfather organized a Methodist Society and served as a Methodist circuit rider just outside Lake Charles, after arriving in the area in 1875. Also, his grandfather was instrumental in the construction of three Methodist churches in the late 1800's and early 1900's, which currently exist as Henning Memorial United Methodist Church in Sulphur, La.

A donor-advised fund is sort of like a personal charitable savings account. You can create an account with us and fund it with appreciated stock or other assets, even cash, and then advise us which churches or ministries you'd like to donate to from the account. Additionally, a tax deduction is allowed when contributions are made.

The Foundation does not charge any fees for administering the fund; however, the focus of the gifts should be United Methodist ministries.

"Using the Foundation to administer charitable gifts has many benefits," said Dub. "I give when it is best for me. I just call them up and tell them where I'd like to donate, and they take care of it at no charge. They also track my contributions and provide tax documentation at year end."

DAFs are increasingly popular because of their ease and flexibility. They are attractive not only to high-net-worth people, but also those who are younger and have more modest means. People also like them because they can donate now, but choose their charity later and still get the tax deduction in the year the gift is made.